skip to main | skip to sidebar

Wrapping up production for the movie "The Lie" and other news. 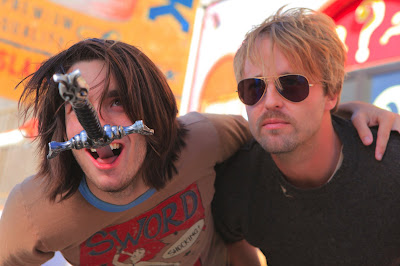 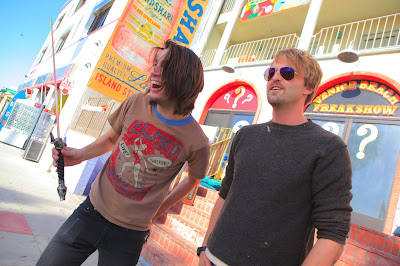 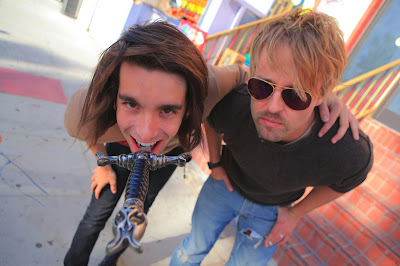 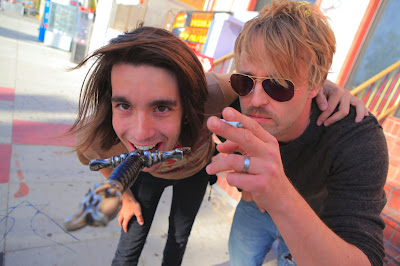 Today was a busy day at the good ol' Venice Beach Freakshow, we had Joshua Leonard (from Blair Witch fame) in the house filming the last scene for his new movie "The Lie". From what I was seeing on the monitors, the look of the production is going to be beautiful, I can't wait to see the final product.
In other news, tomorrow and Friday I will be filming for my first game show, it's tentatively titled "Chance" and is being produced by Ryan Seacrest. The concept of the game is simple enough and I have the chance (Hey!) to acquire the means to acquire some really wonderful things that I've been wanting for quite some time. More at 11.
Photos by Nathan Jones, by clicking on his name you can find many production stills from today.
Posted by Brett Loudermilk at 1:24 AM 13 comments:

in need of attention.

I need to be updating this blog with some regularity, for my own sake. In the future I will be writing more, not only about sideshow but daily occurrences as well. I need to use this as an outlet.
So, I've moved to Los Angeles. I have been living here for close to seven months in a guest house and now I finally have an apartment in Venice Beach... a place to call my own.
The studio apartment is very modest and small, it is also expensive. I needed a place conveniently located since I do not drive, being close enough to the Freakshow to be able to bike there is definitely costly since I'm close to the ocean.
This apartment is my first. It seems to be a learning experience as well... I have never though this much about home decor before. Now I find myself looking at interesting rub-on transfers for my new dinette set, things like a 2-headed baby for my coffee mug and a victorian style eye to put on my dinner plate. Also, my dear friend DECOY is going to be creating some artwork for my new walls, now I need to learn how to wheat paste. One thing I'm thinking about is what color to paint my walls, it is becoming a problem since I can't make up my mind.
I'm off to buy a bike and a bed.
Posted by Brett Loudermilk at 3:54 AM No comments:

Sword Swallower's Day at Ripley's Believe It Or Not in Times Square.

Posted by Brett Loudermilk at 5:58 AM No comments:

My ISSAD at Ripley's Believe It Or Not in Times Square. 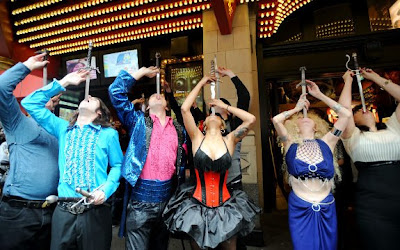 Yesterday (2-28-09) was the second annual International Sword Swallower Awareness Day (ISSAD). Last year, the day was largely ignored by most of the sword swallowers from around the world, mainly because of the lack of knowledge and organization.
This year was a little different.
Sword Swallowers, this year, were encouraged to head for their closest Ripley's Believe It Or Not Odditorium, and many did. Sources say that there were about 15 sword swallowers around the world swallowing at precisely 2:28 pm (In their local time zone).
I happened to be in New York City at the Ripley's in Times Square, along with 9 others.
I got to the museum at 1:00pm and was led through a maze of exhibits and corridors by an employee and ended up in the break room there I met with Albert Cadabra (He's the main talker at the Odditorium) and Donny Vomit. We chatted for a while and caught up.
Soon after I was wrangled by the marketing director of Ripley's and made to take photos with both a Ripley's Corporate photographer as well as the in-house photographer. That went well, minus the fact that I had to stand on a really high and narrow counter top and swallow swords.
Other blade glommers started showing up at this point. Lady Aye was one of the first to get there, then Fred Kahl and Keith Nelson.
I was then mic'd up for a film crew to interview me for a new sideshow documentary. For the interview we decided that the best lit area was sitting beside a wax Ubangi woman on a red pair of lips shaped love seat, I let her hold my swords.  The interview went nicely.
I headed back out to the lobby where I met up with Heather Holiday, Todd Robbins joined by his baby boy, Phineas and Harley Newman. Then, all of a sudden Natasha Verushka showed up, she had just flown into the city from an exotic locale on a helicopter (It would have been a nice image, seeing her hair whipping about in the breeze). There was one other female sword swallower, Alison Cheevers, she's new to the game and I wonder what she'll do with her freshly acquired talent.
Then, I was pulled to the side by a Chinese news crew... Yes, thats right! They proceeded to interview me and a few others.
The lobby of Ripley's was swarming with photographers and videocameras.
2:28 was coming up quickly, so we were all lined up outside in front of the place, roped off and we were surrounded by the pandimonious  press. Albert stood on his box and introduced each one of us, and gave pseudo breaking news announcements about the goings on of all the other participating Ripley's locations.
The countdown began.
10...9...
Our swords were ice cold and everyone was trying to warm them up before the plunge.
8...7...6...5...
Cameras were flashing away.
4...3...
We began licking our swords, lubing them up to ensure a smooth decent.
2...
1...
SWALLOW!
The cameras were going crazy, the crowd that was so large, it blocked 42nd street, was screaming and applauding, the street cops were clapping and we were suppressing our gag reflexes.
We removed our swords, took deep breaths and smiled and waved. Happily accepting our accolades.
All of us moved back into the lobby, posed for group shots, and did one last drop. We all then mingled with everyone as they got in line to see the inside of the museum, took photos with them and answered their questions.
All in all, it was a wonderful afternoon, spent with wonderful people.
Now, I'm curious to see what the next International Sword Swallowers Awareness Day will hold.
*The photo above comes from the NY Daily News
(From left to right)
Harley Newman, Brett Loudermilk, Fred Kahl, [directly behind Fred] Todd Robbins, Heather Holiday, [directly behind Heather] Donny Vomit, Natasha Verushka, Lady Aye, [Not pictured] Keith Nelson and Alison Cheevers.
Posted by Brett Loudermilk at 8:01 PM 21 comments:

Posted by Brett Loudermilk at 2:48 AM No comments:

I was a friend of John’s, we met in 2007 on the way to the Sideshow Gathering in Pennsylvania. I got a ride there with him and Bob Blackmar, and on that ride he told me story after story of life on the road. As a young sideshow performer myself, it was a very inspirational car ride. I ended up rooming with him at the hotel and there he showed me his old scrap books from the days when he ran his own show, told me stories about Otis Jordan and even gave me one of his old pitch cards and some magic wonder mice on top of that! When he spoke about the old shows and   Coney Island, I felt like I was there. I felt like a little kid again, seeing a sideshow for the first time. During the course of the next few days we talked and joked, gossiped about what was going on in the world of sideshow, we talked about Jam Auctions and pitching and his dream of moving to the Philippines and pitching there. He gave me his “seal of approval” that weekend and it has really meant a lot to me.

John had such a colorful history, he was friends with most of the sideshow greats, he knew so much and had so many stories to share. Sadly the stories he didn’t get to tell, won’t be heard. The ones he did tell though, will be forever remembered by his friends and passed down to other generations.

I will always remember John as a passionate, caring person that had a hunger for the strange side of life. He affected so many people in his lifetime, including myself. He was an inspiration to me and everyone in the business. John Bradshaw, will be remembered as the man that started the Coney Island Sideshow, a show that is now world famous. Without John’s contributions to sideshow, who knows what shape the business would be in today, he helped peak the publics interest, therefore giving guys like me a job. The sideshow community thanks him for that.

John will live on in the hearts of showmen, sword swallowers, blockheads, glass eaters and fire breathers, historians and fans of the strange. His legacy will continue.

-----
The Bradshaw family needs our help. They have been in a financial crisis for months now, and with John's passing and christmas only a few days away, they need help more than ever.
Please, reach into your pockets and give a 5 a 10 or even a 20 dollar bill, if you can send 'em 100. Give what you can, give them the help they need.
Don't send flowers it wasn't John's style (not to mention to carny folk, a waste of money!)
Here is the address that donations can be sent to;
Elisa Bradshaw
2025 Denton Dr.
Richmond, VA 23235
Thanks.
Posted by Brett Loudermilk at 11:01 PM No comments:

Posted by Brett Loudermilk at 3:01 AM No comments: